Twitter is in a frenzy today with news that Gerald McCoy will be returning to the Buccaneers next season, courtesy of an article written by Rick Stroud entitled: “Why Gerald Mccoy will return for a 10th season with the Bucs.” 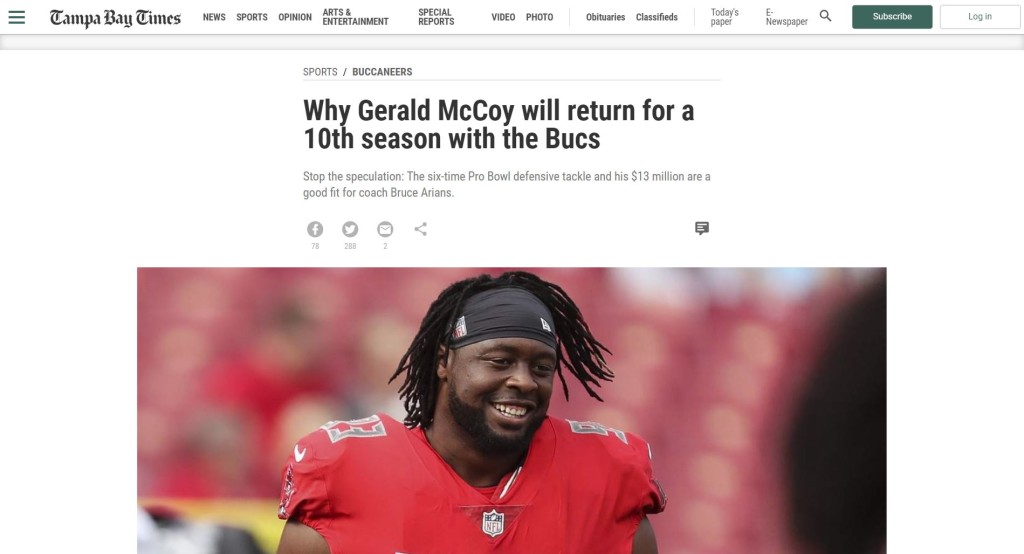 “Stop the speculation,” the headline reads. “The sixth-time Pro Bowl defensive tackle and his $13 million are a good fit for coach Bruce Arians.”

Who, exactly, deemed McCoy “a good fit”? The headline seems to imply it was Bruce Arians, but there’s no attribution given. Was it Bruce himself? Was it someone close to him? Someone in the front office? Unclear.

A typical headline that satisfies journalism’s cardinal rule of always citing your sources might typically go something like this:

Stop the speculation: The sixth-time Pro Bowl defensive tackle and his $13 million are a good fit according to coach Bruce Arians

The headline, and subsequently Rick’s article, give us absolutely no indication who it is making this claim. The only quotes in the article are tweets not from Bruce Arians, but Gerald McCoy.

The general public’s takeaway from the article is that Bruce Arians has publicly stated McCoy will remain with the team, based on one paragraph of the article:

But how do you know this, Rick? Bruce Arians? An insider into the organization? Your own brain? I’m confident Rick is not making up information, but to not tell us where he’s obtained his is just sloppy journalism.

To make matters worse, the only quotes used in the article were those two tweets from Gerald McCoy. It’s not completely clear Rick even talked to an actual human person to write this article.

But he was spending a lot time on the internet. The rest of the article argues why McCoy should stay with the team, including his stats, how easy the transition to a 3-4 will be for him, the lack of trade value due to the “glut of defensive tackles available in free agency,” how reasonable his salary actually is, and who we can cut instead of him.

This. Is. Not. News. The cardinal rule of journalism is you always cite your sources. The author of this article lays out a lot of arguments–why McCoy is worth keeping–and not one of them is attributed to anyone. We then have to assume they are the author’s.

Sources are vital in good journalism. It allows the reader to judge for himself whether the information is credible. We are never given the opportunity here.

I am not saying McCoy will no longer be with the team. It is entirely possible Rick has a source inside the organization and this is breaking news, albeit bad journalism. The two are not mutually exclusive. Equally plausible: perhaps it’s an opinion piece that was not properly labeled “Opinion,” which, in that case, would not necessarily be the fault of Rick, but of his editor at the Tampa Bay Times.

Nonetheless, as fans we have a responsibility to our team to examine information we’re presented and analyze it critically. We must demand better from the sources of that information, just as we do our team.